Still in the early stages but a lot has happened in 2021. Here are some of its defining moments!
December 30, 2021 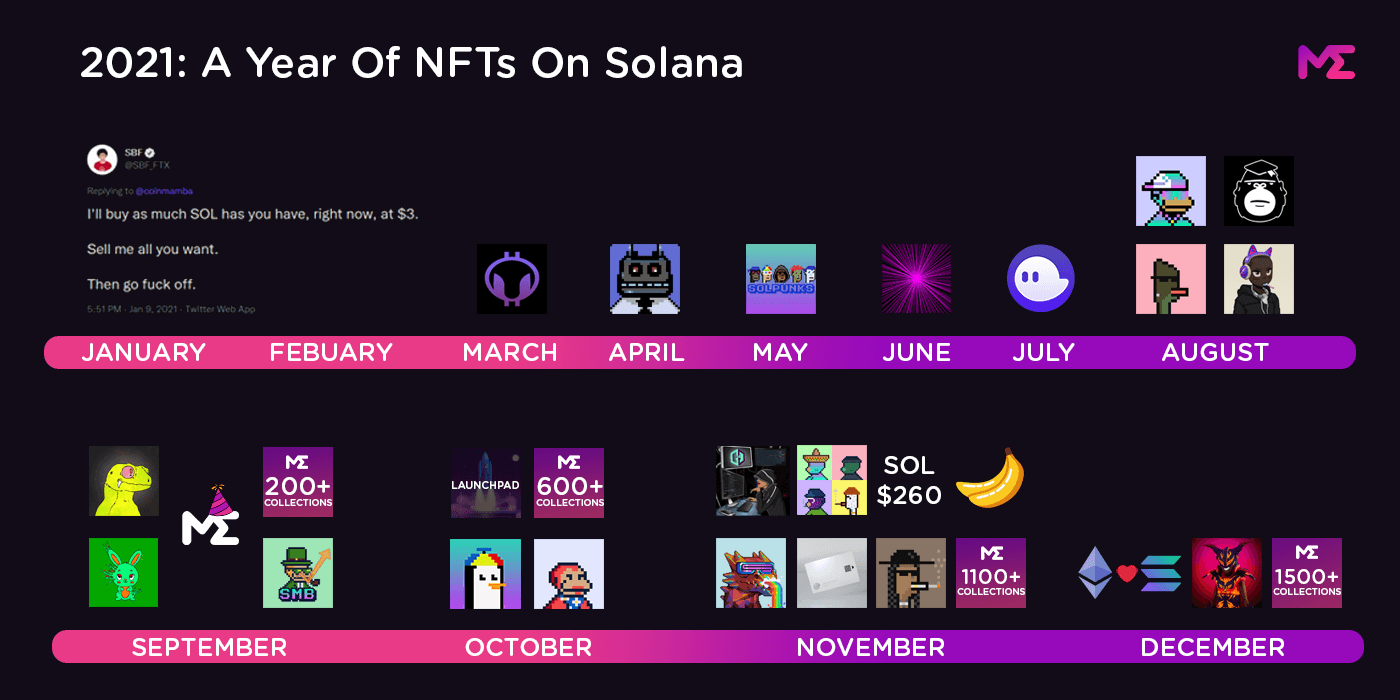 On the 16th of March 2020, Solana created its genesis block and launched on mainnet beta. Since then, a LOT has happened for NFTs on Solana. 2021 is the year it exploded. Here are some of its defining moments:

January: We’ve got to start with SBF’s famous tweet…

Sell me all you want.

Then go fuck off.

There’s a debate as to which NFT collection came first — Kreechures or Solarians. Gen 0 Kreechures arrived in March. The blockchain doesn’t lie. Solarians minted soon after. You decide.

At this point, the Metaplex token standard has yet to be created.

Since its beta launch in April, Phantom wallet has grown. In July, they went live to the public and introduced its staking feature. Within the first 12 hours, over $1M funds were staked to 30+ validators.

SolPunks brought ETH’s CryptoPunks to Solana. Apparently, they were also the first collection to mint on the Solana blockchain.

Frakt launched on June 8th, offering art that was different from your standard profile picture NFT.

Degenerate Ape Academy sold out in under 10 minutes. A few days before its mint on the 14th of August, a couple hundred NFTs were deployed but the mint was pushed back because there was an issue with the metadata. It sort of kicked off candy machine as we know it.

ThugBirdz’s first mint took place on the 24th of August but the final mint took place a few days later. Some people had accessed the mint contract earlier and minted early. Creator @0x_thug gave free birds to OG supporters and issued refunds for minting errors. They are one of the first NFT collections on Solana to make a donation to charity ($115,995 donated to @WildlifeSOS)

Aurory’s mint took place at the very end of August and marked the beginning of blockchain gaming NFTs on Solana.

September: A Wild Ride & The Birth of Magic Eden

Then, on the 14th of September, the Solana network was offline for 17 hours. The network resumed per usual in under 24 hours.

A few days later, Magic Eden was born! Our first day of trading was on the 17th of September. We did $50,000 in trades. In September, we had 200+ collections listed.

Galactic Space Geckos minted at the end of September. People dig the Geckos and lore.

Not the first rug but certainly memorable — people thought they minted a 3D “quality art” NFT but got a series of emojis instead. The Iconics Rug took about $140,000. Silver lining: a bunch of the community (individuals and collections) stepped up to give victims actual NFTs and $SOL.

@AntiSocialBots Thank you so much for the airdrop. @SOLBigBrain these guys helped me I lost like 5 sol on iconics rug.

Thanks universe for this😭💯 pic.twitter.com/CfhW4aFnkc

Pesky Penguin’s launched on the 9th of Oct and is the first deflationary NFT collection with their snowball that sends pengus to the grave.

We also saw more NFTs with royalties on their roadmaps emerging but that worked momentarily as there were concerns about whether this could be viewed as securities.

It is our view that Alpha Art, by providing royalties to holders of Piggies NFTs from the sale of other NFTs on their platform, such as Geckos, may be in violation of applicable securities laws. 1/12

Female Derivatives popped up like Solana Monkette Business which sold out in 3 minutes.

Shadowy Super Coder DAO gives you and me, the average person, the chance to be part of seed round allocations for Genesys Go.

Another derivative of NFTs on Solana, Back2Back was launched. It featured the imagined backs of Thugz and Monkes. Back2Back contributes back to the respective DAOs.

On the 12th of November, MonkeDao became the first NFT DAO to operate a validator node on Solana. Others follow suit.

Solana releases an Energy Use Report. One transaction on Solana is equivalent to less than two Google searches.

Portals, a metaverse platform, minted at the end of November and sold out in 4 minutes. (ETH integration is coming real soon!)

Magic Eden had its biggest day of transactions early December. 50,000 SOL in total 🚀. And according to Solana, 5 million NFTs had been minted across the Solana NFT ecosystem.

A bunch of play-to-earn gaming NFTs launched in December. Just to name a few: Mini Royale: Nations, BitBrawl, ChainMyth and Nekoverse. So, it’s no surprise that Solana Ventures launched a second blockchain gaming fund, this time with $150 million.

Gm, about the mint my first ever SOL NFTs! 🕺✨

On the 21st of December, Magic Eden announced its move to an open-listing marketplace. We’re in the midst of rolling out these changes and we value your feedback. Just hop on our Discord!

Thank you, creators, collectors and community for journeying with us! We look forward to 2022 with you!