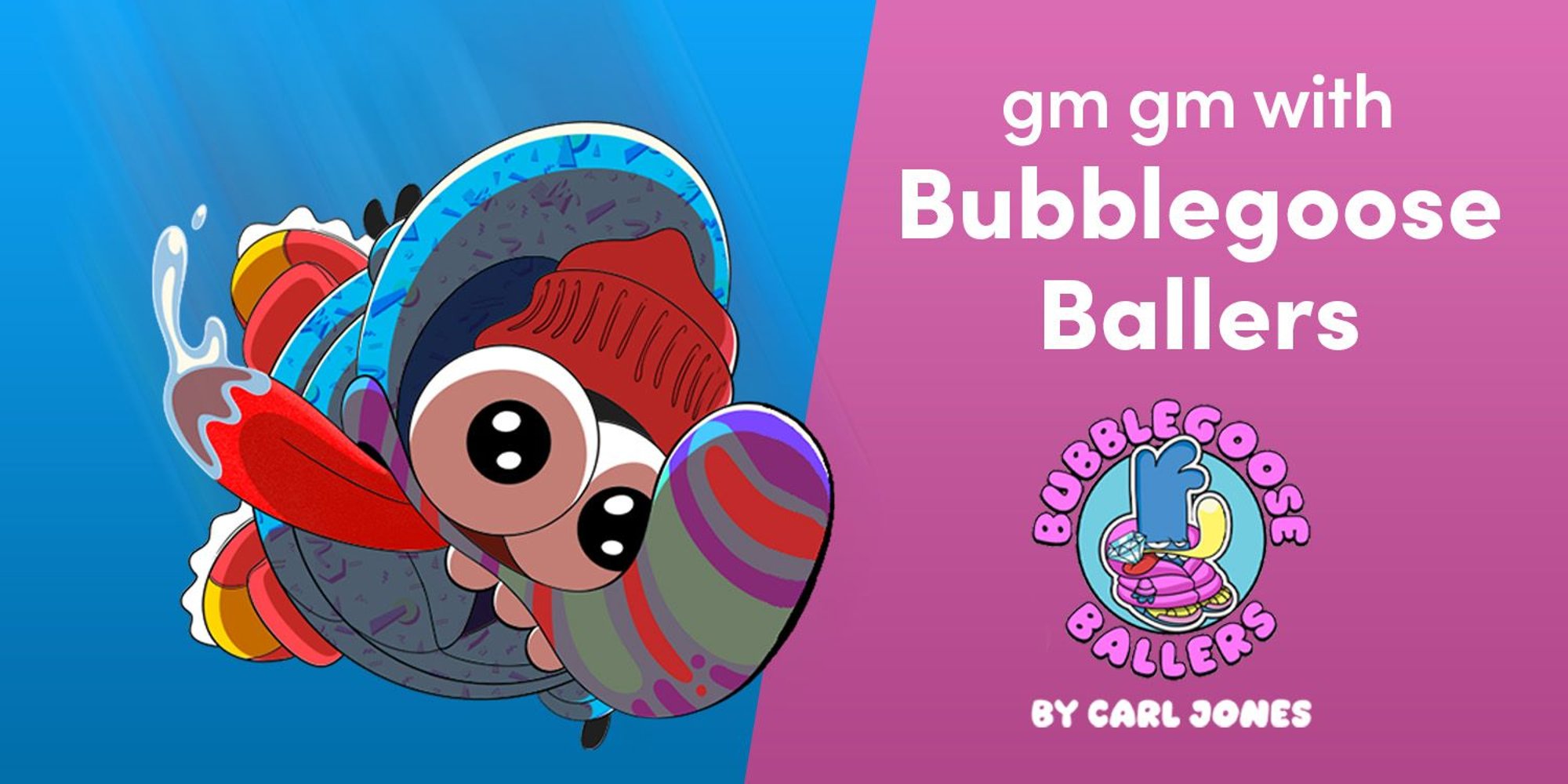 Martian Berry, an animation studio, has their pulse on culture. The prolific animation producer Carl Jones, is behind the studio that cultivates “creative voices while pushing the boundaries of visual art to create a unique and culturally specific experience”. Together with WAGMI Beach, a web3 native organization behind the successful Catalina Whale Mixer, they launched Bubblegoose Ballers.

For decades, the goosey geese lived in Carl Jones sketchbooks. With Bubblegoose Ballers, his sketches came to life as an NFT project-animated cartoon series. “With Bubblegoose Ballers and our Web3 community, we aim to “be the change we want to see” in the entertainment ecosystem by giving creators and fans new levels of involvement, creative freedom, and content ownership.”

“The animation industry is booming right now. Partially because of COVID and the streaming platforms now have the pleasure of supplying the entire world with content. So a lot of animation is being made, but not many voices in animation.” To reach global eyes and hearts, most streamers are looking for really broad content that has “Universal Appeal”. Unfortunately, this can detract from the color of humanity’s diversity. The duo mentions that it sometimes removes the uniqueness of different points of view.

But, blockchain technology serves to preserve what’s special about each of us. Carl Jones anticipates that the future of the world will include blockchain technology. It’ll be part and parcel of daily life. “It’s just the evolution of web2. In the same way, we went from analogue to digital. But to be honest, nobody knows what it’s going to look like. I mean, we are writing the code right now in real-time.”

The hope is that the media industry itself will undergo a rapid transformation in line with the zeitgeist. Imagine media driven by “human passion, imagination, as technology is the tool used to design this future, as opposed to it being a tool of control and manipulation to get people to buy shit.” Carl Jones’ personal goal is to use his art to inspire people to see the world through a different lens. “A unique point of view, instead turning all art into one singular experience that we are all forced to consume. Hopefully, this will help shape the future of media.” And the cool thing is that you – the community – can actively shape the future.

We speak to Carl Jones about staying true to one’s creative voice, censorship and creating an animated TV series with the backing of web3’s community spirit:

ME: Let’s start at the beginning. What creative opportunities does Web3 promise?

CJ: The idea that you can build IP and incubate ideas with your own community.

A community that can participate in the creative and profit from it at the same time. I believe that all industries that are only focused on what they can take from the consumer, is quietly coming to an end.

People should be valued more than just consumers. These same people or “consumers” help to build every brand on the planet. Even more so now since they can tweet or blog about it. And in most cases reach more people than the corporations. There is unlimited power in that. So when Love and I saw the endless ways that web3 decentralizes power, empowers creatives, and builds communities, we were all in.

ME: The project is ambitious and incredibly exciting. How do you anticipate the creative process of the Bubblegoose Ballers story with the community, yourself and Love?

CJ: Everything I write always starts with character. So my creative process has always started with sharing. People sharing their personal experiences, what makes them laugh, what makes them cry, and sometimes just their presence alone. All of these things help to mold and shape the people or characters in the stories I want to tell.

It allows me to not only keep my finger on the pulse culturally, it also provides the necessary information to speak to the human condition, in a very specific and authentic way. Which is what makes for a great story and great comedy.

The twitter spaces we have are always filled with the funniest and weirdest group of amazing people, whose personalities and voices have already inspired ideas for characters in my head. Also seeing a lot of the fan art on the discord, inspires ideas for some parodies we can do on the show. Because I want to treat the animated series a lot like Animaniacs, where they would sometimes randomly transform a situation the characters are in, into a pop culture reference, like a scene out of Jurassic Park or Back To The Future. So the fan art definately inspires a lot of good parody ideas for this world we’re creating that will exist in this fun pop-cultural, bizarro world.

The execs at networks have a lot of pressure right now. They are all trying to capture a global audience and not offend too many people, in a new world where there is a heightened sensitivity to all content or media. So the first people impacted by this are the creatives. Who are usually forced to comply and alter their art to satisfy corporate interest.

NFTs on the other hand provide the opportunity to create freely, without all of these concerns. Which in success, changes the way the project is approached by the major networks and studios. Therefore our established communities give us more leverage when it comes to establishing a good amount of stake in the creative direction of the show. This also allows Bubblegoose Ballers to deliver the same fearlessness, comedy and satire that has been in all my work in the past. That’s what the market is missing right now, in my opinion.

🪄 Get a Bubblegoose Ballers on Magic Eden and shape the future of media!