Reid Hoffman is a successful strategist, entrepreneur and investor with strong experience in seed stage companies such as Paypal, Facebook and LinkedIn. Reid talks AI and NFTs. 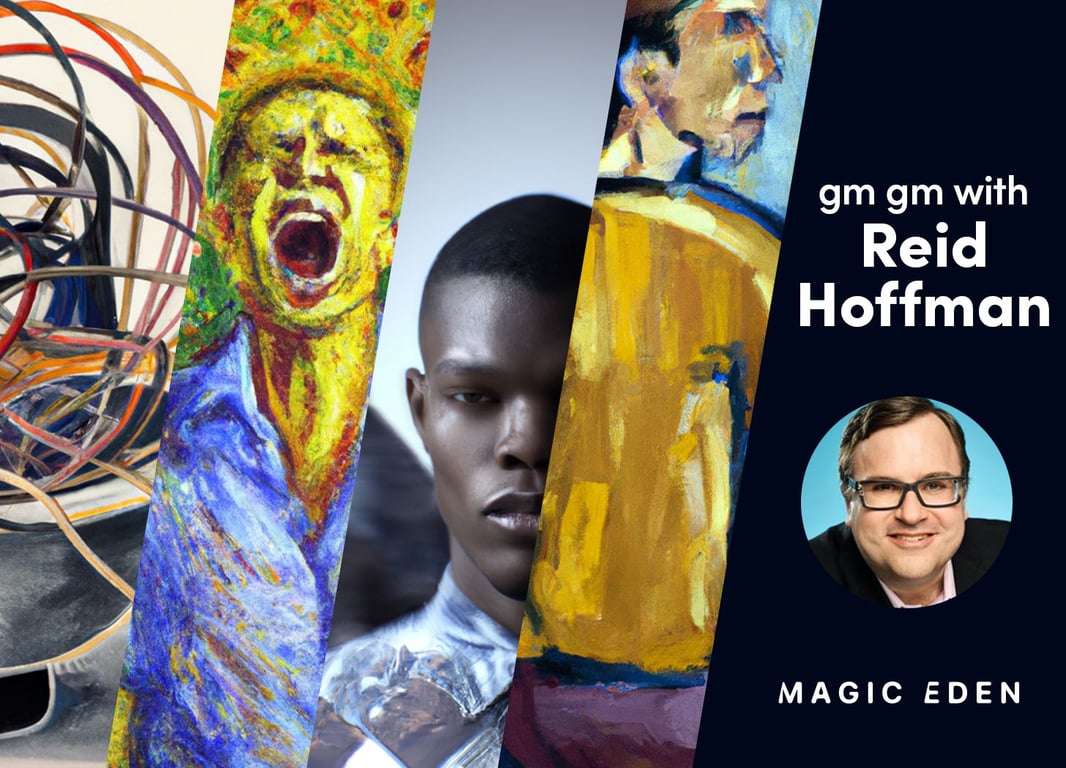 In the world of NFTs, the possibilities are endless. Reid Hoffman has been incredibly inspired by their potential lately, as well as a new emerging technology called DALL·E.

To keep things concise: DALL·E are machine learning models. The AI uses text descriptions to generate digital art. His passion scaled and evolved into the inevitable creation of his own work. Out of this art came his recent NFT which sold for 696.97 Solana on Magic Eden.

Reid's fascination with people led to his long-term pursuit in emerging technologies. “How we form beliefs and opinions, how we communicate, and how we actively try to create a better world for ourselves, rather than just letting the forces of evolution play out… I could have studied psychology or the humanities – but I ultimately decided that the most interesting lenses I could pursue this through were areas like symbolic systems and artificial intelligence,” Reid shared. Fast forward and now he’s a board member for some of the biggest tech giants in the world, including Microsoft.

Technology moves faster than people think it does. Reid has known this for a long, long time. That’s why he and his collaborators at Greylock, a venture capital firm, have been heavily involved in the Web3 space.

Reid talks about how Artificial Intelligence can be used to generate images from text descriptions, what “untranslatable words mean” and the future of blockchain.

ME: How did your fascination with AI translate to NFTs?

RF: One defining characteristic of AI is how it can enable scale in so many different ways, and in experimenting with DALL-E, this is extremely clear because of how quickly you can use it to just start generating thousands of unique images. Since the images are all different, though, DALL-E's not just creating abundance; it's creating something new, which I describe as “uniquity” – aka unique ubiquity. That got me thinking about NFTs and the digital scarcity they enable, and I wanted to explore what happens when you combine AI with NFTs.

My partners at Greylock and I have been participating intensely in parts of Web3, through investing and collaborating. NFTs can be an important platform for many applications – not just art and not just ownership. Since I’d been thinking about NFTs, when I saw DALL-E some months ago, I realized that this would be one of the areas where uniquity will flourish at scale – hence our Untranslatable Words collection.

ME: Can you break down the meaning of “untranslatable words”?

RF: Language is obviously one of humanity's greatest technologies. It's what enables the imagination, planning, cooperation, and assessment that we use to improve ourselves and make progress over time. But even as it distinguishes and unites as a species, we still see this remarkable diversity in the more than 7,000 languages that humans speak around the world. The idea of untranslatable words is one way to tap into that richness – just looking at these unique formulations to try to better understand what the culture that produced them is paying attention to and valuing by naming it through language.

ME: What are your thoughts on the future of Blockchain technology?

RF: I started investing in blockchain companies in 2014 and have been advocating for cryptocurrency in various ways ever since. But creating this NFT collection has been my most immersive experience to date, in terms of participating in the blockchain economy in a very hands-on way. What impressed me was how smoothly everything went, in terms of tokenizing our assets, offering them for sale, then completing the transactions.

I think in part what's stopping the general public at this point is that we're still in the very early early phases of things, where people still just need to get comfortable with doing new things, even when it has actually become, from a user experience perspective, relatively easy to actually do those things.