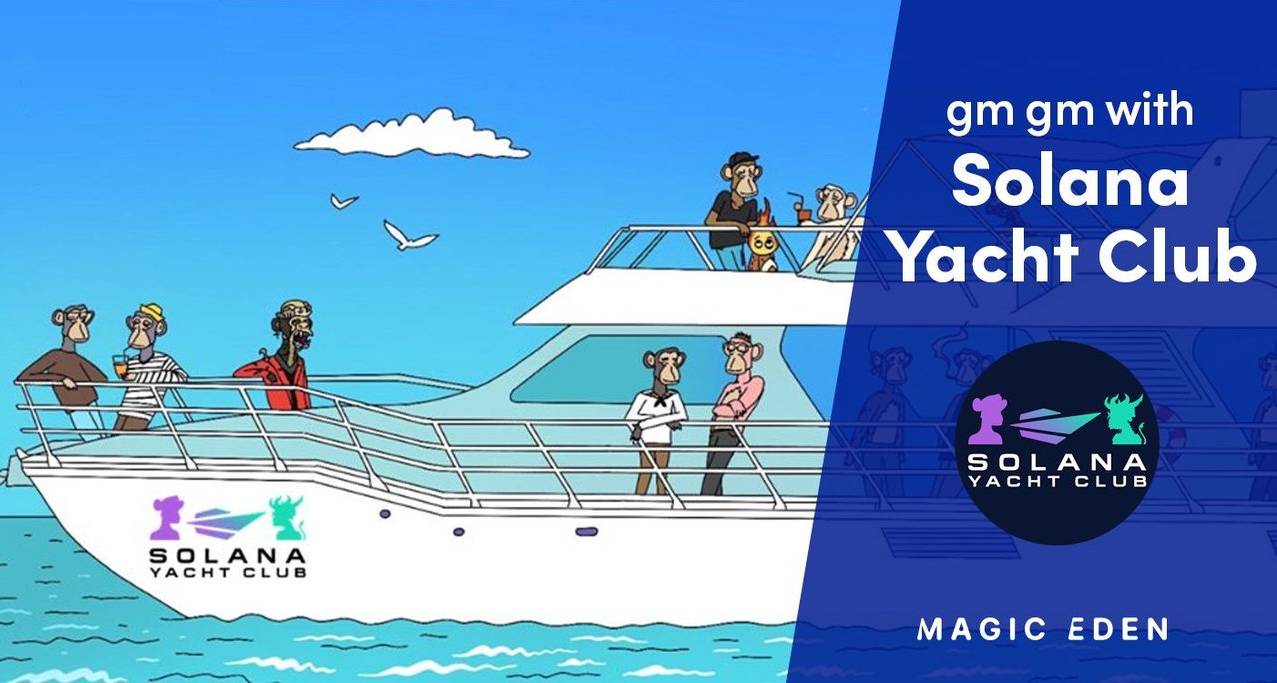 Since its mint on April 30th, 2021, Bored Ape Yacht Club has amassed a cult following. Post Malone bought an Ape in his music video, One Right Now. Jimmy Kimmel proudly showed off his Ape on late night television. Paris Hilton pumped BAYC to the general public. A lil’ cringe, but it did the trick. Yuga Labs, the team behind Bored

Ape Yacht Club, brought NFTs from an internet subculture to the mainstream. With the acquisition of Crypto Punks and Meebits earlier this year, Yuga Labs is pioneering what it means to be a web3 brand.

In mid-August last year, Bored Ape holders received one of two separate mutant serums (M1 or M2) which transformed their NFT into a Mutant Ape. Both Cornel and Gaurav don a Mutant Ape as their pfp. “BAYC is the holy grail of the NFT ecosystem. Yuga Labs is building a media empire centered around NFTs that quickly became a household name in the crypto and NFT industries. Every project looks at them as an idol.”

The duo founded Solana Yacht Club early this year, gated for certain NFT holders — specifically holders of the Bored Ape universe. A few BAYC/MAYC holders got together for the Nuked Ape mint from the Stoned Ape Crew, which resulted in a small Solana alpha group consisting of a community of seasoned ETH investors. Soon after, they opened their doors to three other ‘blue-chip’ NFTs: Crypto Punks, Azuki and Moonbirds, as word quietly spread and requests came flooding in. Out of their 250-strong members, 80% hold an Ape.

Cornel and Gaurav of Solana Yacht Club talk about connecting communities, a multi-chain future and of course, BAYC.

ME: Solana Yacht Club is all about interconnectivity. Tell us about how you brought these communities together towards a common goal.

SYC: We are different from any other ETH project or alpha group. Our members are fairly diverse, ranging from ETH / Solana whales, big influencers to blue chip project owners. We have folks holding as many as 50-120 bored apes, influencers / whales like WillyTheDegen, SolBigBrain, Raves, HGE and blue chip project owners such as Frank from Degods, Peblo from Cets on Creck, PFO from SAC and Taj from Boryoku Dragonz, which we invited to our community as honorary BAYC members. A few of our members have recently launched successful projects such as Froots, Shakudo Rakkudos, Bridge 3 Labs. While most of our members are seasoned investors and advisors in the space helping new and existing projects with marketing or other advisory services, we wouldn’t be complete without our resident shitposters. After all, someone has to keep the Magic Eden intern busy on Twitter.

We have been trying to slowly bridge the gap between ETH and Solana by onboarding more ETH folks and helping them mint or purchase their first Solana NFTs. We’re all like-minded people hunting for the next BAYC and while most of us still chase every mint, we also provide seed investments in certain projects we believe in by buying into the vision and holding long term.

ME: What does an achievable cross-/multi-chain future look like? Do we see it extending beyond ETH-SOL?

SYC: We think the future will be multi-chain and will extend beyond ETH-SOL.

Cosmos as a chain is attracting more developers looking to build their own L1 chains. Not many know but the entire Luna ecosystem was built on the top of Cosmos; similarly many enterprise grade L1s are adapting to build on Cosmos SDK. On the enterprise adoption, Zkrollups are great for building some use cases, but true adoption of enterprises would be via privacy centric blockchains like Secret. While Matic has done a good job in breaching the mainstream, enterprises are still concerned around putting their data on-chain for the world or competitors to see.

We think Ethereum and Solana will face competition from new Layer 1s that are entering the market aiming to solve current blockchain issues. Two L1s that come to mind are Aptos and Sui, both backed heavily by VCs. They’ve been designed from the ground up with upgradeable blockchain tech and much faster TPS. Aptos’ team claims they minted millions of NFTs on testnet in under an hour just for fun.

The great part is that we’re still extremely early! Solana reached a high of 37 million monthly daily active wallets in May, which pales in comparison to TikTok’s 1.2 billion monthly active users. WAGMI :)

ME: In your experience, how does BAYC support their sub-communities?

SYC: As far as we know Yuga Labs doesn’t affiliate themselves with any sub-communities, so while there isn’t an official support from Yuga, they do encourage their holders to use the IP of their apes or mutants and work on their own ventures. They were one of the first NFT projects to offer holders full commercial rights over their NFTs, giving holders ability to monetize their NFTs in addition to potential price appreciation or free airdrops (e.g., merchandise, branding for restaurants, events, media, etc.). Ultimately, Yuga created a community-focused business that looks to create more utilities for NFT holders.

They’re also really big on safety and making sure their holders are being protected, so the team has been educating the community and sub communities on how to stay safe, understand the risks and protect their investments. This in turn has helped us get some ETH investors to Solana, folks who have been reluctant to make the jump initially. We were in touch with the BAYC team while creating Solana Yacht Club to ensure that we were compliant with their branding and community guidelines.