The brothers behind Vandal City talk about how game theory works in NFTs and on building community-centric games. 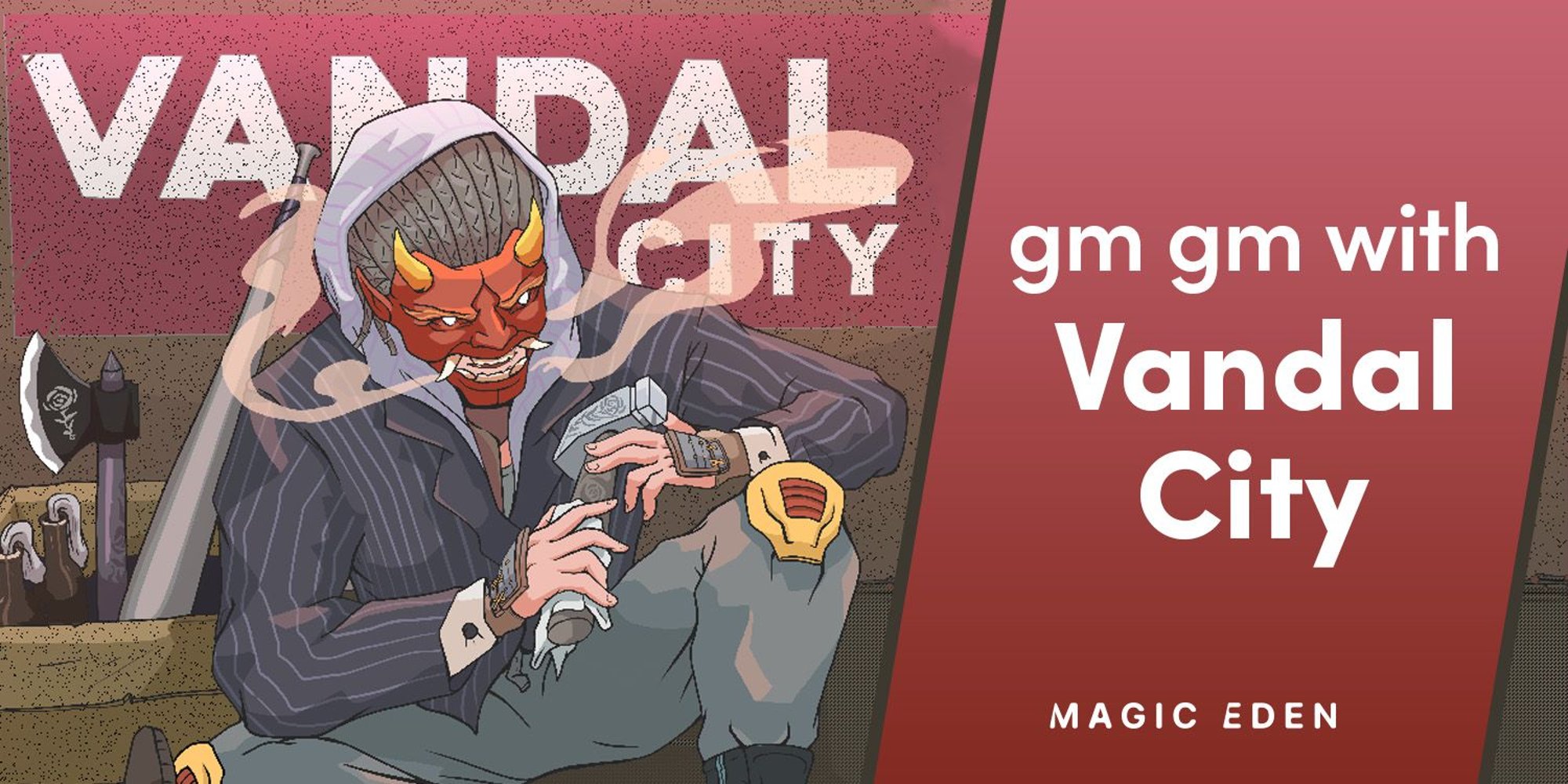 Multi-millionaires stay hidden in their private estates on land and suites in the sky as a band of bandits and bank robbers attempt a hostile takeover. Welcome to Vandal City.

Brothers @solberry and @unshackled, are behind this innovative heist game that takes place on the blockchain. The team has grand plans for the project, envisioning it to be more than a game, as an ecosystem for web3’s participants to meet with a twist. Vandal City is a hub that mirrors a living city “where all creators and enthusiasts can find a reason to explore and leverage the city” as players earn “clues” that assist them in locating $SOL hidden in various Solana addresses. Talk about incentives.

After studying mathematics and economics in university, @unshackled was captivated by game theory thanks to his training in “infinitely repeated games” and his views on author Richard Thaler’s outstanding works on behavioral theory and economics. He seeks to combine his lifelong interest and bring into the NFT space “to create and innovate alongside the great minds that are pioneering the migration to Web3.” @solberry shares a similar background and vision — to earn the status of “pioneer” in the Solana NFT space. Initially trading NFTs on Ethereum, @solberry knew that Solana is where it’s at. We’re witnessing a shifting moment in NFT history: Bored Ape Yacht Club, Doodles, Moonbirds, Azuki, and CloneX experienced a combined trading volume of below 1000 ETH on June 5, the first time this year. “I realized that the Solana NFT space is the future epicenter of innovation with tons of potential for projects to pioneer something new.”

The team views the global bearish climate as an opportunity. “Bearish markets favor teams that have demonstrated an ability to build and create. The standard that projects are held to, and the due diligence performed by investors dramatically increases. If a project is able to meet this standard, launching in a bear market is a fantastic way of separating itself from the grain and preparing itself to gain major recognition when markets recover.”

Solberry and Unshackled talk about how game theory works in NFTs and on building community-centric games.

ME: Game theory frequently comes up on your AMAs, and it’s simply fascinating. How do you incorporate game theory into NFTs as a trader and project owner?

Early on, my focus was on the mathematics around game design. Where pure mathematicians will surely always win these games, but as we’ve seen in modern day representations of the Keynesian Beauty Pageant this is not the case.

The entire world, especially the NFT market, is subject to “irrationality”, and being able to predict the level of irrationality and its distribution is something that plays very well. This is always top of mind for me when designing systems.

You have to give players the ability to influence their chance of winning. Players have to accept that to win they’re not going to be able to follow a discrete set of instructions. They have to leverage social skills, computational skills, and creativity to truly win. But the most beautiful systems give players an enjoyable time even where they don’t “optimize”.

(editor’s note: The “Keynesian Beauty Pageant” is an analogy by Keynes to describe the actions of rational agents in a market, in which entrants are asked to choose the six most attractive faces from a hundred photographs. Those who picked the most popular faces are then eligible for a prize.)

ME: The announcement of “City Gates” was a defining moment, leading to amassing over 200k followers on Twitter in less than a month. What's essential to effective NFT marketing?

VC: The first thing people see when exposed to an NFT project is the artwork. Before the whitepaper is read, before the team does any AMAs and, before due diligence occurs.  Having unique and creative art that is just as consistent as beautiful allowed us to gain our initial visibility. Once we achieved this, we realized that effective marketing comes from eliciting an emotional response from the viewers, and there is no better way to do this than to give people a story they are committed to. Our first day where we saw our audience grow dramatically was when we announced that the "City Gates" were open.

We posted an image of a flashlight that indicated to all those watching that they had 24 hours to join the city. Once they arrived in the Discord server, the channels immediately available were limited. The City Gutter is where everyone started. It’s a hectic place where the chat was so fast it was difficult to even get noticed. People felt as though they truly arrived in a city, an unforgiving place where you have to try and find a way to stand out. And that's exactly what they did. Suddenly everyone was talking about Vandal City, fan art was going wild, and people were doing anything and everything to climb the social ladder of Vandal City.

ME: What inspired Vandal City’s core idea of community-centric games?

VC: We decided to create a community-centric project because NFT projects across the board require four pillars to be successful - Community, Utility, Artwork, and Creativity. To achieve one of our goals of becoming an internationally recognized entity - we decided to focus on creating a foundation where our community feels they both have a voice and an audience. Gaming, especially competitive gaming, has always created strong foundational communities where players and fans find common ground.

Post-mint, we will focus on scaling various verticals and their sub-communities. The team will focus on creating scalable utilities such as mobile games, podcasts, art galleries, “more heist games”, designer quality merchandise, etc. People come from different backgrounds in the world of Web3, and our team aims to provide each of these people with an avenue or city street they can call home.