Liberty Square is rewriting the lore meta as you read this. Dig into how they push the lengths of what an NFT is.
October 12, 2022 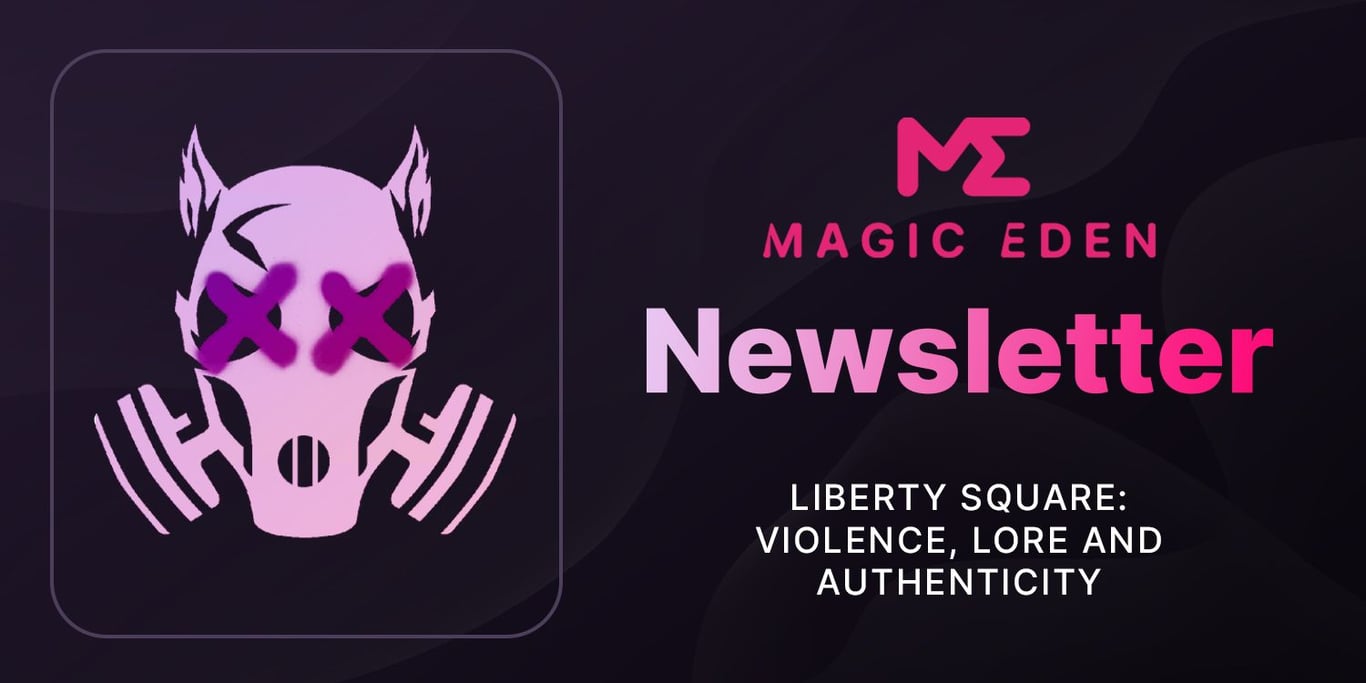 Centered around a plague war, they are a lore-based project. Each of their 12 distinct characters travels through a unique journey. Following the classic structure of narrative fiction, there are three acts to complete.

We’ve seen lore-based projects come. Most are short-lived. So, what makes Liberty Square different? How do they captivate an audience with a short attention span? A community of flippers? Get people to… read in this day and age?

What Liberty Square has proven is that there’s an audience for everything. Drawing from Liberty’s (the founder) years of experience in entertainment and media, he shared: “Understand people. Then, understand how to communicate your needs and also their wants. Why are they there? What are their motivations?” Liberty Square found its audience and they continue to extend its reach. But they weren’t always at the pinnacle of Solana NFT projects. “There were times from February to June where there were only three messages a day.” The team's relentless belief in their vision and enduring desire to build and innovate has made them one of the most sought-after NFT projects.

Liberty has sold out arenas and stadiums, worked with the best musicians, and sold millions of records. But, standing in front of the Shoebox Theatre, an old club dating back to 1939 where Jazz legend Duke Ellington, the Ramones and many more played, he knew that the Solana Hacker House was different. He had read a tweet from Bryce and, moments later, booked a flight to Seattle. “I saw a different kind of magic. It was my hook, line and sinker”. Instead of sticking into the neat category of a “lore-and-art” based project, Liberty pushed the project to fully utilize Solana’s brilliant dev community and its tools.

Early last year, companies had reached out to collaborate on NFT collections, but Liberty politely declined these cash grabs. What remained, however, was an underlying curiosity; by June, he found himself falling in love with the impetus of NFTs and found Solana in September. Captivated by the vibe, composability and transaction speeds, Liberty discovered the future. “I have two daughters, and I truly believe they will grow up with blockchain technology.”

In December 2021, Liberty met Cas. Cas is Liberty Square’s marketing and community manager. “I’m like the punk rock kid, highly convicted in my views, and Cas adds this counterbalance of thoughtfulness.” Cas shared an analogy of how she views NFT communities in the form of lunch tables. “I can explain ETH and SOL like that. Projects, as well. While these people are sitting at separate tables and may not have come together, being in the same community, doing activities like our ciphers, brings them closer.” One of the many easter eggs at Liberty Square is their ciphers, which Liberty himself makes incredibly difficult. So much so that a community-run cipherDAO was born. This group of mega-brains came together and started helping each other out, all for the next clue. “By November, everyone will understand where the ciphers lead to”.

“Every single thing we do has an intention,” Liberty said. He enjoys challenging people to be the best versions of themselves — be it the holders or the team. Pushing them to their limits sometimes means going to new, uncomfortable places. That also means discovering a side of themselves that they may never have encountered.

“In my opinion, what we do is for the entire ecosystem. Every decision we make has that intent in mind. With that as our North Star, there’s no confusion. We know who we are and what we want to achieve.” — Liberty

Frisk and Cas belted a hard no when Liberty said the route they were going down was violence. Violence has a negative connotation. But, in a world of imagination, the act of no boundaries, where anything goes… is freeing. The back and forth between the two team members and Liberty was a turning point.

“Violence is a metaphor for realism. When I’m on spaces, I’m the same guy right here. I’m the same guy with my wife and kids. My clients. There’s no show.” Choosing this route was a gamble; Cas feared people would actually be violent. But the result was a revelation of people’s true selves. A place where they could be authentic and welcomed. They could express themselves freely without judgment (while remaining respectful). This realistic nature attracted more people.

“If I were, to sum up, Liberty Square: You can be yourself. You don’t need to conform to any standard. Even when people sell and leave the group chat, we add them back in. No one really breaks off.” — Cas

There’s a contingency of people in the NFT space who may not be the loudest. They may like a tweet and want to participate… but don’t. Unheard and ignored, Liberty Square proposes a welcoming place — a place for all. “We call ourselves the violent little squirrels running around web3 that stick together, with more and more added to the group,” Cas proudly said.

From the weapons to the color of their eyes to the fixtures of their clothing — everything was designed knowing that war was coming. “I think it’s really hard to look at an image and create a story behind each character after you have the characters,” Liberty shared.

The premise of Liberty Square is the Plague Wars, occurring 15 years before the present, the year 2037. A fraction of characters take over Liberty City, the heart of it, Liberty Square. The ‘squirrels’ (the NFTs you see) have been living under the thumb of tyranny. Animatedly speaking, Liberty unveils what happens next, to which Cas says, “we haven’t revealed it yet”. (dear reader, you’ll have to find out for yourself). A recent addition to their masterful storytelling is an Eisner-winning author. For those unfamiliar, the Eisner is an award given to remarkable individuals in their achievement of American comic books.

With people’s attention spans getting shorter, it’s interesting to see NFTs become a tool for storytelling and reading. Liberty has a theory. The canned answer is that it’s all an experiment. But his honest answer, coming from a sociological standpoint and having observed people consume media and entertainment for over a decade, Liberty shared: “We rolled it out by microdosing it. The journal entries aren’t long. They’re compelling. With each entry, they teach you a little more about each character and scene.” The picture starts painting itself. Wanting to know what comes next, holders become readers, ready to engage with a bigger chunk of 8 to 10 pages of story. Do this 10 more times, and they unknowingly digest a short novel. “We’re easter egging them straight down the path.” The last scene ends with the subject arriving at the same setting as every other subject. Liberty Square ends with the beginning in mind.

“October’s going to be a fun month.”